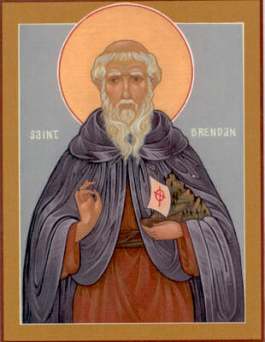 Last time we dropped in on Brendan and company, they were just setting sail from the Isle of St Ailbe where they had spent Advent and the Christmas season. They sailed throughout Epiphany season with no excitement or land in site. As they enter the Lenten season, their food and water starts to dwindle and three days after their supplies run out, land is sighted.

They land on the island where they find a pure well with plants and roots growing in a circle around the well. From the ‘well’ was a stream full of fish running to the sea. Brendan instructs the brothers to take only what they need and no more. Some brothers take one cup of water, others two or three. They all fall asleep and are unable to be awakened for one, two or three days depending on how many cups of water they took. Brendan rebukes the brothers for taking more than they need and instructs them to fill the boat with just enough fish, roots and water for them to eat once every three days, drink only one cup per day, and no more until Maunday Thursday. When the boat was filled they set sail toward the north.

After three days sailing, the wind dropped and the sea became so smooth it was as if it was coagulated. Realizing that they were unable to row any further, Brendan orders the brothers to put up the oars and let the sail down, they would wait for the wind and go wherever God directs them. They sailed on relying on the wind alone for the next 20 days, when the wind changes direction and blows eastward until Maundy Thursday. They maintain their discipline always eating only every third day.

So what do we learn from Lent in the Navigatio? Brendan and company must rely solely on the direction and provision of God. When they reach the coagulated sea, usually interpreted as a slushy, nearly frozen ocean, they must rely completely on God to guide them. Their oars will get them nowhere in the slush. Their limited provisions also put them in a forced fast. This fast places them again at the mercy of God because such slim provisions mean that they will be near starvation if they do not reach their Maundy Thursday destination on time. Indeed, this may be the challenge of the coagulated sea. Had they fought the sea with their oars rather than relying on the wind of God they would not have reached their destination on time and would have starved. The fast also tests their discipline to make their provisions last.

One of the interesting things about this section is the utter absence of Ash Wednesday. There is absolutely no notice of the beginning of Lent at all. Brendan and company spend about four days overall on the island and then go on for about 20 days before Maundy Thursday. So, they must be nearly half way through lent when they arrive on the island. Wooding dates the Latin Navigatio to about c. 730-830, suggesting that Ash Wednesday was not a major commemoration yet by then. 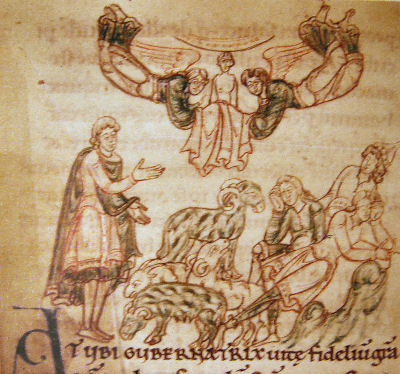